This week polymorph is going to become available for testing. We are rolling this feature out differently than usual, so I thought it would be good to explain the process and why we are doing it.

Also, now that I have moved house, I finally have decent internet speeds again, so it’s time to bring back developer streams. Details are towards the end of this log.

The short version is that we will be making polymorph available on a beta branch of TaleSpire so that the brave and wreckless can try it out and report bugs before we push it out to everyone else.

We’ve wanted to start doing this as it allows us to catch critical bugs without doing damage to existing creations.

We also know that even though they are unsupported, there are folks out there hacking the game to make mods. We’d like to give them a bit of time to update their work to fix anything that isn’t compatible with changes to the game.

To this end, the polymorph beta will be opt-in and take place on an entirely different backend from the one you are currently playing on. And that backend will only last for the duration of the testing. That means that when we release the feature to everyone, the test backend will be shut down, and everything that was on that branch will be cleared.

The process to opt-in will be something like this: 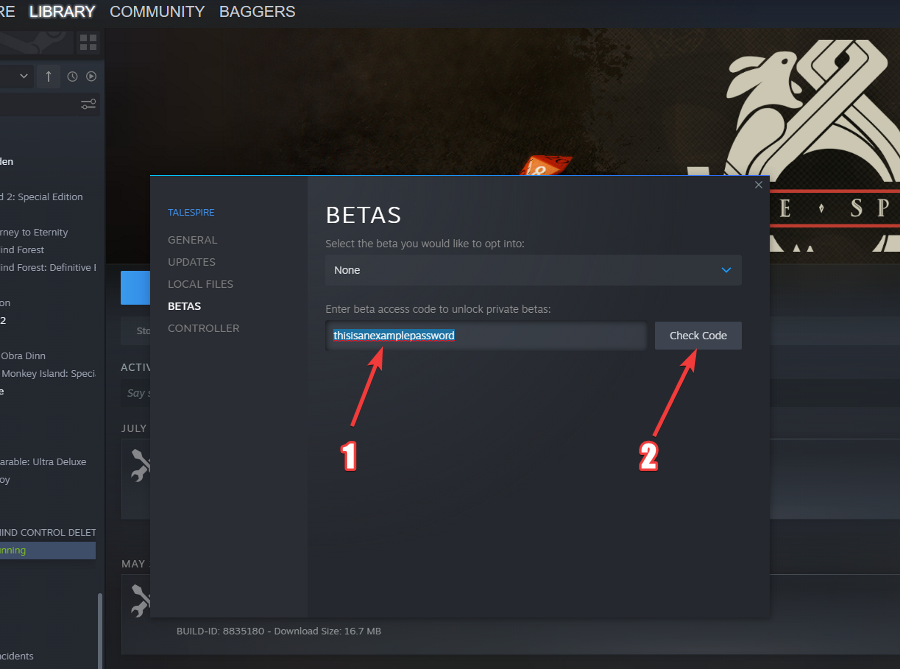 Opting out is as simple as setting the beta back to “None.”

We’ll have full instructions and warnings out on the day.

Yup, we are finally doing a dev stream again. We will be live on twitch.tv/bouncyrock this Thursday at 11pm Norway time (click the link above to see the time in your timezone.

This will be a general catchup. As usual, you’ll have the opportunity to fire questions at us too.

That’s all for today

That’s all the news for today, there has been plenty of code and art work going on, but we can save that for another dev-log.

Disclaimer: This DevLog is from the perspective of one developer. So it doesn’t reflect everything going on with the team

· 45d ago
Oh I'm getting on that beta branch asap! Thanks again, fantastic work and really looking forward to your dev stream!
Reply 1 Like

· 45d ago
Excited to see this and pre-patch plugins/schedule updates for them :)
Reply Like